Researchers find ceiling height can affect how a person thinks, feels and acts 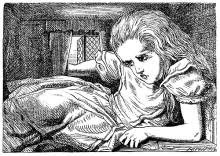 Which department store (or, gasp, supermarket) will be the first to introduce individual variable-height ceilings?

As I progress beneath my mood-sensitive ceiling from the celebrity cook book section (gothic cathedral) to the electric razor display (colonial cottage), I become more and more delighted (suburban bathroom) to part with trolley loads of cash for coffee table clutter and vibrating groomwear that under a fixed-height ceiling I would never really appreciate.

Ikea?
...could do well to de-claustrophobe their anti-idea spaces.
But I hope Coles doesn't lower the ceiling standards for detail-orientated tasks like which biscuits.

Meanwhile everyone goes to Bunnings for a bag of abstract thought...

see also surgery
She hypothesizes an operating room with a lower ceiling would be more beneficial to surgeons because it focuses their attention on details. Recovering patients could potentially recuperate faster in a room with taller ceilings because they aren't as focused on their condition or ailment, she said"

Where will it end! Actually, it would be interesting to compare the quality of a quadruple bypass performed in the Sistine Chapel versus Busby's Bore.

Or Busby's Bore sounds like it could be the place for recuperation?
The post-operative boredom of the focus on condition.
A bore for you and a bore for me.

Well for the convict labourers involved, chipping endlessly away at two miles eight chains of solid sandstone, it must have been painfully boring. Still, I understand all the details are there ... except under Oxford street: in 1934 this section was filled with sand to prevent the subsidence of early Mardi Gras floats ...

ah, I think the greater analogy went over my head, LB.
Was only thinking space and name.

Tracks on the castiron ceiling?