I was inspired to write this last week after watching a spot of tennis on teev, but it's already rather passe I'd say: 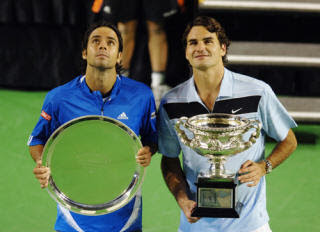 
Anyway yesterday I found myself watching Women's Golf on television. For the rare meditative quality and the pleasant aesthetics, which is why I used to like watching the cricket. But as we know cricket has been ruined by the glare of dollars, the blare of ads and pundits, the loss of langour. (I liked the snippet of fictive cricket in Midsomer* on Saturday night though, which was sufficiently green and slow and inter-generational, commercial-free but murder-full)

Gon missing in the middle.

I watched the same spot of tennis.....Not for the tennis but for Gonzalos.....he is yummy!!

Gonzales is cute and also had a wonderful tournament. The YouTube clip is pretty neat, B.